What does COVID19 tell us about democracy vs authoritarianism?

The following article was originally published by the Observer Research Foundation on May 16, 2020.

Few trends have been as evident or exasperating over the past weeks as the use of the ongoing novel Coronavirus (COVID-19) pandemic to advance preexisting political arguments. To those who see the pandemic and its management as a vindication of authoritarianism, or evidence of the necessity of public healthcare, or confirmation of flailing democracies, it is easy to cherry-pick examples to support these arguments. No less than Ben Rhodes, the former U.S. Deputy National Security Adviser, tweeted “It is no coincidence that countries run by right-wing nationalists are handling COVID-19 the worst (see: US, Russia, UK, Brazil),” ignoring numerous glaring examples to the contrary, such as Italy, Sweden, Hungary, or Ecuador.

So what do countries’ handling of the coronavirus pandemic actually say about the relative competence of various regime types? To make an informed assessment, it is possible to map proxy measures for governments and their success in tackling the pandemic. Freedom House’s annual Freedom in the World is ultimately subjective (and its methodology debatable), but uses a standard set of criteria to assess democracies and authoritarian governments on a scale from 0 to 100. While there are many ways to assess countries’ success in managing the pandemic, the best proxy is the number of resulting deaths per million people. This captures success in limiting the number of infections and the quality of treatment to those who are infected.

Any such analysis of these two metrics should also be accompanied by a number of important caveats. An obvious one is that the pandemic is not over. Certain countries that appeared to perform well in its early stages now appear to be worse off, while others have recovered admirably from early setbacks. Using the number of deaths per million people does not capture the secondary consequences of the pandemic, such as the resulting economic hardship that counter-measures may have caused. Ideally, the most effective governments will have minimized coronavirus casualties while ensuring a minimal impact to economies and lifestyles.

Equally, there are limitations to simple political metrics. In addition to some of its methodological shortcomings, the single Freedom House score does not capture the complexity of countries’ political characteristics, let alone their administrative or resource capabilities. Moreover, certain specially-administered territories are excluded from the political analysis. Therefore, this exercise should be seen as little more than an illustration, based on what we know so far.

There is another important point to consider, as a forthcoming working paper by Mudit Kapoor, Shamika Ravi, Anup Malani, and Arnav Agarwal makes clear. They found that 92% of reported coronavirus-related deaths were in democracies (which are home to 48% of the world’s population), while only 8% were in hybrid or authoritarian regimes (home to the remaining 52%). As they dug deeper into this disparity, they noticed that there was far more deviation around the moving average of coronavirus reporting in democracies than in authoritarian regimes. The available data from more closed systems of governance is suspiciously tidy. This suggests that authoritarian governments may be significantly underreporting coronavirus cases, including deaths linked to the pandemic.

With those important caveats in mind, what can be derived from the available data for the 182 countries and territories for which such data is available? As Figure 1 (below) shows, the trend line based on the coronavirus deaths updated on May 13, 2020 is ultimately inconclusive. While a large number of countries towards the upper end of the freedom index have high rates of coronavirus-related fatalities, a significant number of those countries fare relatively well. African countries with varying degrees of political freedom – from Ghana and Botswana to Angola and Ethiopia – appear to be equally unaffected by the virus. 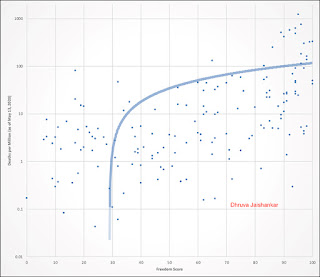 As Figure 2 (below) shows, Taiwan and Iran stand as outliers on opposite ends of the spectrum, as do San Marino and Burundi. 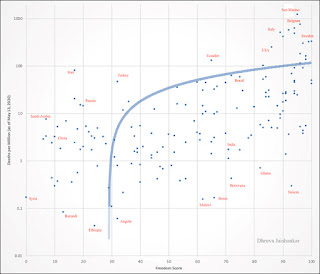 Nor is the picture any clearer among large countries and economies. Despite a recent upsurge of coronavirus cases, India remains on the lower end among democracies in the developing world, while Vietnam – a single-party state – has had a negligible number of COVID-19 deaths. China, despite enjoying a closed political system, remains in the middle of the pack, even accounting for questions about the accuracy of its pandemic data. Neither Russia (with 14.5 deaths per million) nor Brazil (with over 50) appear to have acquitted themselves well, despite very different levels of political and social liberties.

It’s natural for political analysts and commentators to want to impose their own worldviews or thinking upon a problem, particularly one as all-encompassing as COVID-19. But there is little yet to suggest there is a strong correlation between the nature of governments and the impact of the pandemic. Other factors – per capita incomes, openness to globalisation, the nature of healthcare systems, and geographic and demographic factors – are probably more significant. Politics matters, and questions surrounding the effectiveness of democracy will be salient in the coming months and years, as the immediate threat of COVID-19 recedes. But sometimes, a pandemic is just a pandemic.
Categories: ORF
Older Post Home