Economic vulnerabilities and power shifts in a post-Covid19 world 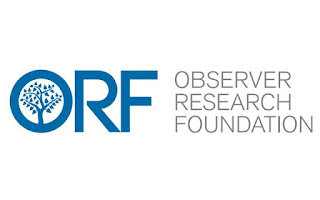 The following commentary was published online by the Observer Research Foundation on April 18, 2020.

It is by now clear that the global Covid19 pandemic will have a wide-ranging impact on the world. While it is impossible to predict with any certainty the scale and spread of the coronavirus, let alone its impact on international economics, politics, and society, it is possible to systematically identify areas of potential vulnerability for the world’s major economies. The unpredictability of the effects of the virus on international politics is in part due to the multiple stages required in any reasonable analysis, each subject to many variables.

The first level of analysis is the virus itself, its effects on global public health, and immediate countermeasures taken by various national and subnational governments to stem its spread and lethality. The second is the economic effects, particularly for major economies such as the US, China and the EU, but also for major developing economies (such as India) and vulnerable smaller economies. The third is what effects the coronavirus will have on domestic politics, including the consolidation or weakening of political leaderships, possible leadership transitions and social cohesion. The fourth is what results will shape international security dynamics, whether accelerating pre-existing trends or reversing others.

International political power derives, to a large degree, from economic power, and the last three decades have witnessed a considerable shift in this regard, reflected in Table 1 below. As the power differential has narrowed between India on the one hand, and the US, Europe and Japan on the other, it has widened relative to China. With Russia, it has swung back and forth, as a consequence of Russia’s susceptibility to energy price swings.

Varied impacts
The coronavirus pandemic will affect future trends in several ways, although the effects will vary widely from country to country. First, transnational exchanges (globalisation) will be disrupted, including trade, travel and foreign investment. Second, financial markets will take a hit as investor confidence suffers, resulting in the tightening of capital. Third, consumer spending will fall due in large part to countermeasures (such as lockdowns and travel restrictions) imposed by governments. Fourth, manufacturing output will suffer as a consequence of the previous three factors, although there will be significant variation from sector to sector. Fifth, energy consumption will decline, initially temporarily and possibly on a longer-term basis.

Governments will have many tools to try to resuscitate their economies from these effects. These will include (1) fiscal stimulus measures, (2) monetary stimuli, and (3) changes to industrial policy. The US and Japan may rely primarily on the first two, but the US government has limited control over industrial policy, while Japan’s attempts at industrial reform under the Shinzo Abe government have been frustrated. The EU only has monetary stimulus as an option, although individual member states (particularly Germany) are capable of fiscal and industrial steps. Weaknesses in Italy and Spain, which have been particularly hard hit by the Covid19 pandemic, could prove limiting. Among the major economies, only China has all three tools at its disposal, although excessive debt by state-owned enterprises will hamper these efforts.

The table below outlines in bold areas of potential vulnerability for each of the major economies; figures in italics indicate areas of relative comfort or resilience. As the table indicates, India is moderately placed on almost every criterion, with neither excessive vulnerabilities relative to others nor major causes for complacency. While Indian government spending appears low (suggesting room for fiscal stimulus measures), India’s low tax base, considerable (albeit manageable) government debt, and low credit rating erode this apparent advantage. Another area of some promise is India’s current account deficit; the pandemic offers an opportunity to redress this, both through the falling cost of commodities (especially energy) and the possibility of a manufacturing boost. 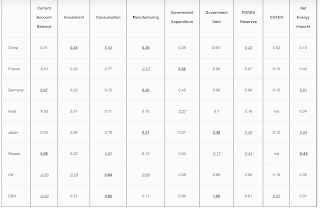 (Notes: All figures based on latest available data from World Bank and IMF.  All figures adjusted to GDP = 1, except net energy imports where total energy consumption = 1. COFER is composition of global foreign exchange reserves; figures for France and Germany adjusted to their weight in eurozone. Reserve holdings in rupee and ruble are negligible. China’s government debt figures (*) are likely understated, as they do not include debts of state-owned-enterprises.)

What next for India
What are the takeaways for India? The most important is the need for an industrial policy for the post-Covid19 world. The immediate aftermath of the pandemic presents a once-in-a-generation opportunity to implement an industrial policy on a national scale, akin to what the US did in the 1940s and 1950s and China did in the 1980s and 1990s. This will only be possible through a series of far-reaching measures, given the great disparity between India’s states and limited room for fiscal manoeuvre. Identifying key manufacturing outputs as national security priorities; providing tax incentives, land acquisition potential, and single window clearances to those planning to manufacture in these areas; improving the secondary debt market to enhance investment; boosting government spending on R&D in critical areas (for instance, health research); and incentivising STEM research at higher education institutions will be necessary. Critical physical infrastructure (highways, rail, ports, high-speed data) and the instruments of national security (defence, cyber, space) offer additional priorities for such a national industrial policy.

A second priority will require observing China’s recovery and response, given its economic and strategic weight. China’s economy is particularly susceptible to declines in foreign investment, manufacturing, and export markets. Declines here could challenge the credibility of the Chinese Communist Party, which explains in large part Beijing’s attempts to shift the narrative focus in its political messaging. Should Beijing implement a full range of measures to stimulate economic recovery, as appears likely, this would artificially inflate growth. At the same time, other countries’ attempts to disincentivise investment into China and increase barriers to market access on national security grounds will negatively impact its medium-term growth prospects. In China, perhaps more than other major economies, economic performance is tied closely to political sensitivities and security policy. Consequently, there will be inevitable concerns about diversionary tensions. India experienced this first-hand in 1962 in the wake of the disastrous Great Leap Forward. Managing these multiple challenges will require India to continue its positive engagement with China, as began at Wuhan in 2017, while accelerating cooperation with balancing powers in the wider region to hedge against various possibilities. An acceleration of India’s ‘Act East’ and ‘Indo-Pacific’ policies—within perhaps more limited means—is therefore an inevitable consequence of the coronavirus pandemic.

A third priority will necessitate tracking developments in the US. The US, which could end up with the largest number of Covid19 infections and deaths, will almost certainly witness the end to the longest period of economic growth in its history. Its economic indicators—including unemployment and the stock market—have already faced severe downturns. But as the US has experienced shocks of this nature before, it can be expected to witness an eventual recovery, likely gradual, helped both by a massive stimulus and buttressed by the strength of the dollar. But the dip will present challenges for India, both in seeking investment from the US and possible complications resulting from a potentially restrictive immigration regime. Bilateral commercial consultations that can identify avenues of mutually beneficial post-Covid19 economic cooperation will be urgently needed.

Moreover, Covid19 will have uncertain effects on US politics. President Donald Trump initially received a boost in approval ratings as the crisis hit, followed by a small slump. Joe Biden, who is the presumptive Democratic presidential nominee, leads Trump in national polls. However, the margin is in fact a lot closer than national surveys imply: polling in key swing states and the demographics of likely voters suggest that Trump may enjoy an edge in the Electoral College. The pandemic will also disrupt important Congressional races. While India is unlikely to be adversely affected by the either the presidential or Congressional elections, it will be important to engage with key stakeholders across the political spectrum, including campaign advisors and legislative leaders, on the panoply of issues that are vital for Indian interests.

Finally, although there will be several other effects for India—major and minor, global and regional—that are harder to anticipate, a potential silver lining could involve a medium-term suppression of energy prices. This would have a positive effect for India’s current account deficit, which in turn would result in opportunities to streamline subsidies and thereby free up fiscal space for other vital investments. Such investments could include capital expenditure in defence, which faced constraints in 2020-2021, as well as foreign assistance, which will be in high demand worldwide and if targeted strategically could confer long-term benefits for India. Additionally, depressed fossil fuel prices could be used as an opportunity to accelerate India’s energy transition to liquified natural gas, which ought to feature in bilateral discussions with major suppliers such as Qatar, the US, Russia, and Australia. At the same time, prioritising solar energy components—an area of supply chain vulnerability for India—will be necessary for the future of the National Solar Mission, as part of long-term energy security plans.

There is no question that the scale and spread of Covid-19 will mean economic setbacks across the board. But, as during the 2007-09 global financial crisis, some actors will emerge relatively better off than others. If India seeks to bounce back relatively strongly, while guarding against further adverse implications (including security), it will have to consider the wide range of possibilities along a few key dimensions.