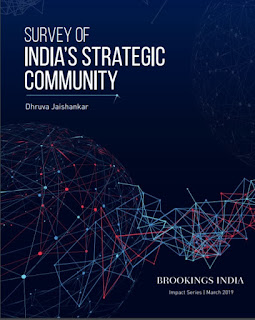 The following report, released by Brookings India in March 2019, can be downloaded here.

Like every major country, India has a strategic community: a relatively small group of professionals who, in different ways, direct or influence India’s foreign and security policy. This strategic community includes career diplomats, bureaucrats, military commanders, and intelligence officers, as well as political leaders from the ruling party/coalition and
the opposition. Additionally, reporters and commentators in the media, scholars at universities and think tanks, and members of the business community also play a role in shaping perceptions and influencing outcomes.

While general attitudes and areas of broad consensus can be discerned in a variety of ways, no systematic survey of India’s strategic community has been accomplished.

In an attempt to fill this gap, a survey of India’s strategic community was fielded in December 2018. Email invitations to participate in a 20-question survey were sent to 290 members of India’s strategic community from 14 December, 2018 onwards. Of those who received the email invitation to answer the SurveyMonkey questionnaire, 127 (44%) responded by 25 December, 2018. The survey was anonymous but linked to individual email addresses to ensure its integrity. The average time spent on the survey was seven minutes. Respondents were required to answer all 20 questions to successfully submit their responses.

The survey reveals some distinct trends concerning India’s biggest domestic and foreign challenges, its major global and regional partners, institutional and policy priorities, and variations across sectors and age profiles. Here are some highlights from the survey:

71% of respondents believe that economic issues constitute India’s biggest domestic challenge. These include, specifically, (1) inequality and lack of opportunity and (2) insufficient skills, education, and employment. Addressing these deficiencies, including through sourcing external investment and financing, research collaborations, and the import of technology, are considered high policy priorities by India’s strategic community.

54% see China’s assertiveness as the most significant external challenge India faces. There are particular concerns about the China-Pakistan Economic Corridor and Chinese investment in the Indian Ocean. Only 2% believe that India should collaborate more with China in the event of greater U.S.-China competition. However, Chinese global dominance is not seen as assured and the strategic community considers the odds of a limited conflict between India and China unlikely.

75% perceive the United States to be India’s most important partner on global issues. Additionally, a large minority of respondents (43%) are in favour of closer collaboration with the United States in the event of greater U.S.-China competition. However, trade disputes and U.S.-Pakistan relations are believed to be constraining the India-U.S. partnership.

74% believe the Indo-Pacific is the dominant framework for India’s extended neighbourhood. The Indian Ocean, South Asia, and Southeast Asia are the regions of chief importance for Indian interests and the East Asia Summit is considered by the largest number of respondents to be a very important institution for Indian interests. Regional connectivity with South and Southeast Asia and maritime investments are considered among the top foreign policy priorities for India.

Views are varied concerning engagement with Pakistan and partnerships in West Asia. There are competing clusters of opinions concerning engagement with Pakistan’s military, civilian government, and civil society. Opinion is also divided as to whether Israel, the United Arab Emirates, Iran, or Saudi Arabia is India’s most important regional partner in West Asia.

Those who believe that India’s most important global partnership is with Russia reflect divergent views on a number of other issues. While only a minority (12%), they are more likely to advocate remaining equidistant between the United States and China in the event of greater competition, believe Iran is India’s most important partner in West Asia, and prioritise the Shanghai Cooperation Organisation and BRICS in India’s institutional engagements.

Minor differences are discernible between the attitudes of decision-makers and influencers. Current and former members of the military, civil services, and political parties exhibit slightly greater wariness about engaging Pakistan than academics, think tank experts, and members of the media. They also deem military interventionism in India’s neighbourhood as more likely and place a marginally higher priority on defence industrialisation and the import of technology over incoming economic investment.

There are some clear differences in attitudes across age cohorts. Those born before 1960 attribute greater importance to the United Nations and do not prioritise an expansion of India’s diplomatic capacity. Those born between 1960 and 1979 generally place a greater priority on the partnership with the United States and on trade issues. Finally, those born after 1980 are more comfortable with the concept of the Indo-Pacific and are less likely to believe that sectarianism and identity politics constitute India’s major domestic challenge.

Strategic elites hold similar views to the Indian public except on Pakistan (and to a lesser extent on China). A comparison with a similar survey of Indian public opinion conducted in March 2017 suggests India’s strategic community shares similar views on international partnerships with the United States, including in the context of U.S.-China competition. However, the public appears to be more critical of Pakistan and slightly less concerned about China than elites, although different methodologies and timings make exact comparisons difficult.