How India Sees the World

The following article originally appeared in The Diplomat on April 21, 2016.

India’s history of Third Worldism and Nonalignment and its traditional overuse of the term “strategic partnership” have long created the illusion that New Delhi treats all foreign relations on a somewhat equal footing. But beyond bland public statements marked by diplomatic niceties, a lot can be discerned about India’s worldview by other means. Organizational structures are often an excellent indicator of a government’s priorities and concerns. Mapping the geographical divisions at India’s Ministry of External Affairs (MEA) paints a rather revealing picture of how India sees the world.

Function over Form
One clear pattern that emerges is that MEA’s geographical organization is primarily functional. Take India’s immediate neighborhood, where whole divisions are devoted to just two or three countries. Landlocked and mountainous Nepal and Bhutan are grouped together, while Myanmar is coupled with Bangladesh, rather than with the rest of Southeast Asia. Sri Lanka and the Maldives are considered as part of the Indian Ocean. And Iran is grouped with Pakistan and Afghanistan, indicating how much India sees policy toward those three countries as interconnected. Prime Minister Narendra Modi’s government has only bestowed a name  – “Neighborhood First” – on what has clearly been a longstanding approach, although the articulation of that policy may have helped give it momentum and direction.

There is often a concern – as at the U.S. Departments of State and Defense – that foreign policy becomes uncoordinated because countries fall under different geographical bureaus. At first glance, this appears to be the case for India in the Middle East (or West Asia, to use India’s preferred terminology), where the region’s major actors – Turkey, Iran, Israel, and Saudi Arabia – fall under different divisions. However, this structure also confers certain advantages, allowing India to simultaneously advance various objectives with multiple actors, such as defense and space ties with Israel, energy and infrastructure considerations with Iran, and diaspora and counterterrorism priorities with the Gulf Arab states.

The imposition of functional interests over neat geographical divisions is perhaps most readily apparent in Africa. Eastern and Southern Africa are areas that are not just more proximate to India, but also enjoy deeper historical and people-to-people ties. Large Indian communities, including merchants and traders, thrived in South Africa, Tanzania, Kenya, and Uganda, all – like India – former British colonies. By contrast, India had far fewer historical contacts with Western Africa, which falls mostly within the Francophonie. Instead, from India’s standpoint, that region is defined by commodities and resources including energy, of which Nigeria and Angola have become increasingly important suppliers.

The Rajamandala
Just as revealing as how India divides up the world is how much attention it pays to each region. The number of countries in each division offers one point of comparison. The fact that 30 countries in Western Africa receive roughly the same resources and attention at MEA as two Indian neighbors indicates the greater attention that India devotes to its immediate periphery. Another factor is the number of diplomatic missions – embassies, high commissions, and consulate-generals – that India has in each region. Nine missions catering to 25 countries in Western Africa points to Indian diplomatic resources being spread far thinner than, say, the same number in just the United States and Canada. The Lowy Institute’s delightful Global Diplomacy Index, which catalogues and maps the global diplomatic presence of all G20 and OECD countries, helps to generate a pretty clear picture about India’s diplomatic priorities. 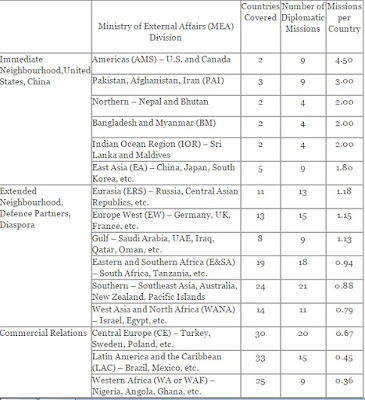 Based on the number of countries per division and the number of missions per country, three tiers are readily apparent. In the top tier – the first circle of the Rajamandala, to riff on the Kautilyan term – are divisions that cover India’s immediate neighborhood, encompassing the members of the South Asians Association for Regional Cooperation (SAARC) plus Myanmar and Iran. The importance India places on relations with the United States and, increasingly, China is also clear. India’s relations with the two biggest global powers are similar but fundamentally unequal. The United States shares space with only Canada, whereas China does with Japan, South Korea, and North Korea, and Mongolia. The presence of five Indian consulates-general in the United States is also indicative of the importance of the Indian-American diaspora. Despite growing commercial relations with China necessitating Indian consulates-general in Shanghai and Guangzhou, people-to-people ties between the two most-populated countries still clearly lag behind political and economic relations.

Beyond India’s immediate neighborhood, the United States, and China, a second tier includes bureaus covering some of India’s most important strategic and defense partners, including Russia, Western Europe, and Israel. It also includes India’s extended neighborhood: Southeast Asia, the Gulf, Central Asia, and Eastern and Southern Africa, regions with historical and civilizational ties to India and large number of overseas Indians. All these regions represent areas where a rising India could potentially devote more resources in the future.

Finally, a third tier is home to a number of important countries such as Turkey, Brazil, Mexico, and Nigeria, but includes regions that are neither strategically significant for India nor home to large numbers of ethnic Indians (excepting, perhaps, the Caribbean). Relatively speaking, India’s diplomatic resources in Central Europe, Western Africa, and Latin America are stretched thin, and in all these areas, India’s diplomatic corps is focused more on commercial relations than on strategic or consular matters.

Reallocating Diplomatic Assets
The decisions taken over the years at MEA to divide of the world into certain units and establish a physical presence in various parts of the world may have been organic, but has not been arbitrary. While there is a clear logic and sense of priorities, certain shortcomings in India’s global diplomatic presence are also apparent.

One obvious weak point is Pakistan and Bangladesh. It is faintly ridiculous that India should have wider consular networks in Indonesia, Vietnam, South Africa, Turkey, Iran, Japan, Germany, Brazil, and Thailand than it does in two of its most important neighbors. The diplomatic principle of reciprocity means that just as India has no consulates-general in Pakistan, Pakistan has none in India. Despite repeated provocations against India supported by Pakistan’s military and no indication that Pakistan has stopped sponsoring terrorism, both Modi and his Pakistani counterpart Nawaz Sharif have indicated a clear desire to normalize bilateral relations between their countries. Establishing consulates-general in both countries would be an obvious place to start. Despite some evident challenges, such as security considerations, Indian consulates in Lahore and Karachi (with reciprocal Pakistani consulates in, say, Mumbai and Amritsar) would help expand commercial and social engagement between the two countries, strengthening the constituencies that favor normalization. Meanwhile, there is even less of a reason for India not to have a wider diplomatic presence in Bangladesh, particularly given that relations are set to improve following the conclusion of the historic land boundary agreement between the two countries.

A second possibility involves rethinking Europe, which has rapidly fallen in India’s list of priorities, but is also undergoing monumental changes of its own. The old divisions of east and west are no longer particularly useful. Germany, given its economic performance, its growing leadership role in European affairs, and its importance for India’s development, is deserving of greater attention, along with France – with its competitive defense, nuclear, and space sectors – and Britain, which enjoys longstanding cultural and economic links with India. In other words, it makes sense to give priority to Europe’s Big Three. Meanwhile, other bilateral relations in Europe, as well as those with the European Union, could be consolidated, to the benefit of India’s uneven relations with the EU.

Third, despite India’s Act East policy, the Southern division – which covers Southeast Asia, Australia, and the Southern Pacific – appears increasingly unwieldy, and involves the largest number of diplomatic missions, with 21. The division oversees relations with several countries that are of growing importance to India, such as Australia, Singapore, Vietnam, and Indonesia. MEA does have a dedicated ASEAN division focused on multilateral affairs but, nevertheless, hiving off Southeast Asia from Australia, New Zealand, and the South Pacific would nicely complement Act East.

The final area to possibly consider is Eastern and Southern Africa, a region that has been developing greater strategic and economic significance as part of the Indian Ocean basin. Currently, South Africa is the only African economy with which India has broad diplomatic dealings and a diversified economic relationship. But given their geography and traditional connections to India, Tanzania, Kenya, Uganda, and Ethiopia could be bigger priorities in the future, India’s gateways into what is already the fastest growing continent.

While a lot has been made of the small size of India’s diplomatic corps – an important problem, but one being addressed – few appreciate the reach of India’s diplomatic presence. Only nine countries (the P-5, Germany, Japan, Brazil, and Turkey) currently have more foreign embassies and high commissions than India. Identifying weaknesses and priority areas deserving of greater diplomatic attention will be necessary if India is to strategically expand its diplomatic footprint, and thereby leverage its commercial relations, widen its strategic ambit, and provide better consular and other services to overseas Indians.
Categories: The Diplomat
Newer Post Older Post Home