The following report was published by the German Marshall Fund on March 2, 2015. The Executive Summary is copied below, and the full report can be downloaded here. 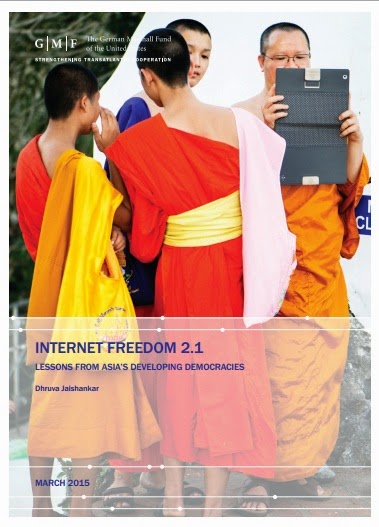 The Internet has become closely associated with freedom of expression and the global economy. Today, it plays a direct or indirect role in almost every aspect of life. Yet many fear the Internet as we have come to know it is at risk, with restrictions forcing fragmentation along political, corporate, or cultural lines. Despite growing concerns about the future of the Internet, discussion surrounding online freedom remains largely mired in a handful of issues: the necessity and appropriateness of government surveillance in the United States, digital privacy in Europe, and censorship in authoritarian states such as China. However, between them, the United States, Europe, and China account for less than half of the world’s Internet users. For much of the rest of the world, any discussion of Internet freedom falls at the complex intersection of political and social liberties, nation-building, security threats, economic development, and resource constraints.

Asia’s biggest developing democracies — India, Indonesia, Bangladesh, the Philippines, and Thailand — account for one-quarter of the world’s people, but only about one-tenth of the global online population. The policy decisions these states make going forward will be of considerable importance for the future of the Internet and offer some useful lessons about the limitations and vulnerabilities of the global Internet freedom agenda as it is currently being pursued by the United States and Europe.

Six broad conclusions or principles can be drawn from a survey of these countries’ experiences.

1.The online world is an outgrowth of the offline world, rather than a distinct phenomenon. Internet policy cannot be considered in a vacuum, or divorced from other relevant aspects of public policy, such as security, economic policy, or governance.

2. Laws, norms, and cultural attitudes related to Internet use vary widely, even among democracies. A one-size-fits-all approach to Internet freedom will not work and may even prove counterproductive.

3.Online freedoms and greater security are not inherently at odds with one another in open societies. Discourse that presents a false choice between security and freedom is harmful for both, as well as for state legitimacy and economic growth.

4.While much discussion of Internet freedom frames the issue as a conflict between governments, corporations, and civil society, each sector is divided on the merits of unfettered Internet freedom.

5.Current legislation pertaining to the Internet in many democratic countries is deeply flawed, even in the context of their own constitutional rights pertaining to freedom of expression. By and large, Internet-related legislation is vague, making implementation arbitrary, and undermining public trust in state institutions.

6. Users are often not adequately informed of the privileges and restrictions associated with Internet use in their native countries. Policies and initiatives designed to advance Internet freedom globally — whether by Western governments, Internet companies, international NGOs, or local Internet activists — have not necessarily been developed with these constraints in mind.

The Internet freedom agenda consequently suffers from a lack of capabilities, skepticism about intentions, misplaced objectives, a dependence on unreliable technological solutions, and charges of double-standards. Governments and Internet activists in Asia’s large democracies can take a few important steps to address some of these shortcomings. First, they can better integrate issues related to Internet freedom with other aspects of policy discourse, including security, intelligence, trade, economics, healthcare, immigration, and the environment. Secondly, they can overcome the apparent trade-off between freedom and security by strengthening the rule of law: empowering independent regulators to oversee government programs and ensuring avenues for recourse to justice for those accused of online infractions. These steps can help improve security while protecting individual rights and privacy. Finally, they can introduce Internet awareness as an element in school curricula, in a manner similar to drug, sex, health, and civic education, along with other measures to better inform the public about the privileges and restrictions of Internet use.

Meanwhile, U.S. and European governments, institutions, and NGOs would be better off adopting a more modest and less eye-catching approach to Internet freedom. If the first step of Internet freedom was recognizing the challenge, and Internet Freedom 2.0 involved putting ideas into practice, what may now be required is a patch to fix glitches in current policy: Internet Freedom 2.1. In addition to assisting developing democracies in their efforts, U.S. and European governments, institutions, and NGOs could help educate legislators, jurists, and journalists from around the world on comparative Internet laws and practices. They could also help “de-Americanize” Internet discourse by highlighting case studies of successful Internet businesses from around the world. And lastly, they could support better research on the relationships between online communications, political and social freedom, and economic development.
Categories: German Marshall Fund
Newer Post Older Post Home