The following article originally appeared in The Indian Express on May 5, 2011. 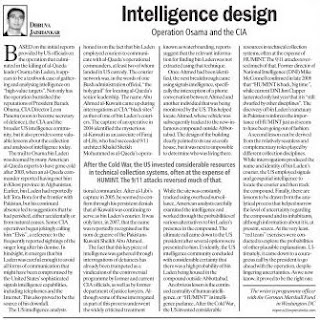 Based on the initial reports provided by US officials on the operation that culminated in the killing of al-Qaeda leader Osama bin Laden, it appears to be a textbook case of gathering and analysing intelligence on “high-value targets”. Not only has the operation burnished the reputations of President Barack Obama, CIA Director Leon Panetta (soon to become secretary of defence), the CIA and the broader US intelligence community, but it also provides some valuable lessons about the collection and analysis of intelligence today.

The trail to Osama bin Laden was deemed by many American al-Qaeda experts to have gone cold after 2003, when an al-Qaeda commander reported having met him in Khost province in Afghanistan. Earlier, bin Laden had reportedly left Tora Bora for the frontier with Pakistan, but his continued absence led to suggestions that he had perished, either accidentally or from natural causes. Some CIA operatives began jokingly calling him “Elvis”, a reference to the frequently reported sightings of the singer long after his demise. In hindsight, it emerges that bin Laden was careful enough to avoid all forms of communication that might have been compromised by the United States’ sophisticated signals intelligence capabilities, including telephones and the Internet. This also proved to be the source of his downfall.

The US intelligence analysts honed in on the fact that bin Laden employed couriers to communicate with al-Qaeda’s operational commanders, at least two of whom landed in US custody. The courier network was, in the words of one Bush administration official, “the holy grail” for locating al-Qaeda’s senior leadership. The name Abu Ahmed al-Kuwaiti came up during interrogations at CIA “black sites” as that of one of bin Laden’s couriers. The capture of an operative in 2004 identified the mysterious al-Kuwaiti as an associate of Faraj al-Libi, who had succeeded 9/11 architect Khalid Sheikh Mohammed as al-Qaeda’s operational commander. After al-Libi’s capture in 2005, he seemed to confirm through his persistent denials that al-Kuwaiti was continuing to serve as bin Laden’s courier. It was only later, in 2007, that the name was reportedly recognised as the nom de guerre of the Pakistani-Kuwaiti Sheikh Abu Ahmed.

The fact that this key piece of intelligence was gathered through interrogations of detainees has already been trumpeted as a vindication of the controversial programme by former and current CIA officials, as well as by former department of justice lawyers. Although some of those interrogated as part of this process underwent the widely criticised treatment known as waterboarding, reports suggest that the relevant information for finding bin Laden was not extracted using that technique.

Once Ahmed had been identified, the next breakthrough came using signals intelligence, specifically the interception of a phone conversation between Ahmed and another individual that was being monitored by the US. This helped locate Ahmed, whose vehicle was subsequently tracked to the now-infamous compound outside Abbottabad. The design of the building clearly pointed to its use as a safe house, but it was next to impossible to determine who was living there. While the site was constantly tracked using overhead surveillance, American analysts carefully examined the intelligence and worked through the probabilities of various alternatives to bin Laden’s presence in the compound. The ultimate call came down to the US president after several options were presented to him. Evidently, the US intelligence community concluded with considerable certainty that there was a high probability of bin Laden being housed in the compound outside Abbottabad.

An obvious lesson is the continued centrality of human intelligence, or “HUMINT” in intelligence parlance. After the Cold War, the US invested considerable resources in technical collection systems, often at the expense of HUMINT. The 9/11 attacks reversed much of that. Former director of National Intelligence (DNI) Mike McConnell confirmed in late 2008 that “HUMINT is back, big time”, while current DNI Jim Clapper lamented only last year that it is “still dwarfed by other disciplines”. The discovery of bin Laden’s sanctuary in Pakistan reinforces the importance of HUMINT just as it seems to have been going out of fashion.

A second lesson can be derived from the relatively seamless and complementary roles played by different collection disciplines. While interrogations produced the name and identity of bin Laden’s courier, the US employed signals and geospatial intelligence to locate the courier and then track the compound. Finally, there are lessons to be drawn from the analytical process that helped narrow the level of uncertainty regarding the compound and its inhabitants, although information about it is, at present, scarce. At the very least, “red team” exercises were conducted to explore the probabilities of other plausible explanations. Ultimately, it came down to a courageous call by the president to go ahead with the operation, despite lingering uncertainties. As we now know, it proved to be the right one.
Categories: Indian Express
Newer Post Older Post Home