US-India Relations: From Vision to Process

The following article appeared as Asia Pacific Bulletin, No. 83, on November 18, 2010, published by the East-West Center. 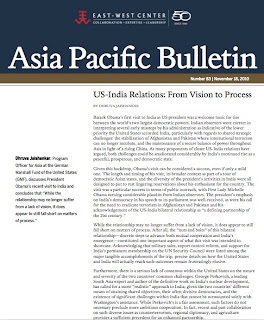 Barack Obama’s first visit to India as US president was a welcome tonic for ties between the world’s two largest democratic powers. Indian observers were correct in interpreting several early missteps by his administration as indicative of the lower priority the United States accorded India, particularly with regards to shared strategic challenges: the stabilization of Afghanistan and Pakistan where international terrorism can no longer incubate, and the maintenance of a secure balance of power throughout Asia in light of a rising China. As many proponents of closer US-India relations have argued, both challenges could be ameliorated considerably by India's continued rise as a peaceful, prosperous, and democratic state.