The following article originally appeared in The Indian Express on October 27, 2010. 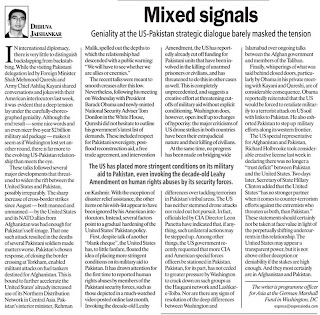 In international diplomacy, there is very little to distinguish backslapping from backstabbing. While the visiting Pakistani delegation led by Foreign Minister Shah Mehmood Qureshi and Army Chief Ashfaq Kayani shared conversations and jokes with their American interlocutors last week, it was evident that a deep tension lay under the carefully-choreographed geniality. Although the end result — some nice words and an even nicer five-year $2 billion military aid package — makes it seem as if Washington lost yet another round, there is far more to the evolving US-Pakistan relationship than meets the eye.

These talks followed several major developments that threatened to widen the rift between the United States and Pakistan, possibly irreparably. The sharp increase of cross-border strikes since August — both manned and unmanned — by the United States and its NATO allies from Afghanistan was bad enough for Pakistan’s self-image. That one such attack resulted in the deaths of several Pakistani soldiers made matters worse. Pakistan’s chosen response, of closing the border crossing at Torkham, enabled militant attacks on fuel tankers destined for Afghanistan. This is bound to further accelerate the United States’ already increased use of its Northern Distribution Network in Central Asia. Pakistan’s interior minister, Rehman Malik, spelled out the depths to which the relationship had descended with a public warning: “We will have to see whether we are allies or enemies.”

The recent talks were meant to smooth creases after this low. Nevertheless, following his meeting on Wednesday with President Barack Obama and newly-minted National Security Adviser Tom Donilon in the White House, Qureshi did not hesitate to outline his government’s latest list of demands. These included respect for Pakistani sovereignty, post-flood reconstruction aid, a free trade agreement, and intervention on Kashmir. With the exception of disaster relief assistance, the other items on his wish-list appear to have been ignored by his American interlocutors. Instead, several factors point to a gradual hardening of the United States’ Pakistan policy.

First, despite talk of another “blank cheque”, the United States has, to little fanfare, floated the idea of placing more stringent conditions on its military aid to Pakistan. It has drawn attention for the first time to reported human rights abuses by members of the Pakistani security forces, such as those depicted in a much-watched video posted online last month. Invoking the decade-old Leahy Amendment, the US has reportedly already cut off funding for Pakistani units that have been involved in the killing of unarmed prisoners or civilians, and has threatened to do this in other cases as well. This is completely unprecedented, and suggests a creative effort at threatening cut-offs of military aid without explicit conditioning. Washington does, however, open itself up to charges of hypocrisy: the major criticisms of US drone strikes in both countries have been their extrajudicial nature and their killing of civilians.

At the same time, no progress has been made on bridging wide differences over tackling terrorism in Pakistan’s tribal areas. The US has neither stemmed drone attacks nor ruled out hot pursuit. In fact, officials led by CIA Director Leon Panetta have indicated that, if anything, such unilateral actions may be stepped up. Among other things, the US government recently requested that more CIA and American special forces officers be stationed in Pakistan. Pakistan, for its part, has not ceded to greater pressure by Washington to crack down on such groups as the Haqqani network and Lashkar-e-Toiba. Nor are there any signs of resolution of the deep differences between Washington and Islamabad over ongoing talks between the Afghan government and members of the Taliban.

Finally, whisperings of what was said behind closed doors, particularly by Obama in his private meeting with Kayani and Qureshi, are of considerable consequence. Obama reportedly reiterated that the US would be forced to retaliate militarily to a terrorist attack on US soil with links to Pakistan. He also exhorted Pakistan to step up military efforts along its western frontier.

The US special representative for Afghanistan and Pakistan, Richard Holbrooke took considerable creative license last week in declaring there was no longer a “trust deficit” between Pakistan and the United States. Two days later, Secretary of State Hillary Clinton added that the United States “has no stronger partner when it comes to counter-terrorism efforts against the extremists who threaten us both, than Pakistan.” These statements should certainly not be taken at face value in light of the perpetually shifting undercurrents in this relationship. The United States may appear a transparent power, but it is not above either deception or deniability if the stakes are high enough. And they most certainly are in Afghanistan and Pakistan.
Categories: Indian Express
Newer Post Older Post Home