The following op-ed appeared in The Indian Express on September 30, 2010. 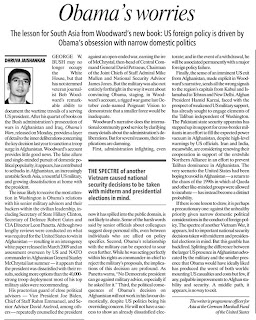 George W. Bush may no longer occupy the White House, but that has not stemmed veteran journalist Bob Woodward’s remarkable ability to document the wartime travails of a serving US president. After his quartet of books on the Bush administration’s prosecution of wars in Afghanistan and Iraq, Obama’s Wars, released on Monday, provides a layer of detail to the inner deliberations concerning the key decision last year to sanction a troop surge in Afghanistan. Woodward’s account provides little good news. The false allure and single-minded pursuit of domestic political popularity, it appears, has contributed to setbacks in Afghanistan, an increasingly unstable South Asia, a resentful US military, and growing dissatisfaction at home with the president.

The issue likely to receive the most attention in Washington is Obama’s relations with his senior military advisors and their backers within the civilian leadership, including Secretary of State Hillary Clinton, Secretary of Defence Robert Gates and CIA Director Leon Panetta. Although two lengthy reviews were conducted on what was required for the United States to win in Afghanistan — resulting in an interagency white paper released in March 2009 and an assessment overseen by US and NATO commander in Afghanistan General Stanley McChrystal last summer — it appears that the president was dissatisfied with their results, seeking more options than the 40,000-strong troop deployment most of his top military aides were recommending.

His praetorian guard of close political advisors — Vice President Joe Biden, Chief of Staff Rahm Emmanuel, and Senior Advisor David Axelrod, among others — repeatedly counselled the president against an open-ended war, earning the ire of McChrystal, then-head of Central Command General David Petraeus, Chairman of the Joint Chiefs of Staff Admiral Mike Mullen and National Security Advisor James Jones. But the military was also not entirely forthright in the way it went about convincing Obama, staging, in Woodward’s account, a rigged war game last October code-named Poignant Vision to demonstrate that a smaller force would be inadequate.

Woodward’s narrative does the international community good service by clarifying many details about the administration’s deliberations. But for several reasons, their implications are damning.

First, administration infighting, even now it has spilled into the public domain, is not likely to abate. Some of the harsh words said by senior officials about colleagues suggest deep personal rifts, even between individuals who are allied on policy specifics. Second, Obama’s relationship with the military can be expected to sour even further. While he was acting perfectly within his rights as commander-in-chief to reject the military’s proposals, the implications of this decision are profound. As Panetta warns, “No Democratic president can go against military advice, especially if he asked for it.” Third, the political consequences of Obama’s decision on Afghanistan will not work in his favour domestically, despite US politics being his overriding concern. He will not have a success to show an already dissatisfied electorate; and in the event of a withdrawal, he will be associated permanently with a major foreign policy failure.

Finally, the sense of an imminent US exit from Afghanistan, made explicit in Woodward’s narrative, sends all the wrong signals to the region’s capitals from Kabul and Islamabad to Tehran and New Delhi. Afghan President Hamid Karzai, faced with the prospect of weakened US military support, has already sought to engage elements of the Taliban independent of Washington. The Pakistani state security apparatus has stepped up its support for cross-border militants in an effort to fill the expected power vacuum in Afghanistan, despite high-level warnings by US officials. Iran and India, meanwhile, are considering renewing their cooperation in support of the erstwhile Northern Alliance in an effort to prevent Taliban dominance in Afghanistan. The very scenario the United States had been hoping to avoid in Afghanistan — a return to the chaos of the 1990s in which al-Qaeda and other like-minded groups were allowed to incubate — has instead become a distinct probability.

If there is one lesson to draw, it is perhaps a precautionary one: against the unhealthy priority given narrow domestic political considerations in the conduct of foreign policy. The spectre of another Vietnam War, it appears, led to important national security decisions taken with midterm and presidential elections in mind. But this gamble has backfired. Splitting the difference between the larger US presence in Afghanistan advocated by the military and the smaller presence that Obama would have ideally liked has produced the worst of both worlds: mounting US casualties and costs but few, if any, palpable improvements to Afghan stability and security. A middle path, it appears, is no way to exit.
Categories: Indian Express
Newer Post Older Post Home