The following column appeared in The Indian Express on March 29, 2010. 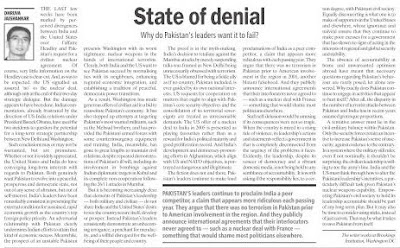 The last few weeks have been marked by perceived divergences between India and the United States over l’affaire Headley and Pakistan’s request for a civilian nuclear agreement. Of course, very little information on the Headley case is clear-cut. And, as was to be expected, the US signalled an assured ‘no’ to the nuclear deal, although only at the end of their two-day strategic dialogue. But the damage appears to have been done. Indian commentators, already frustrated by the direction of US-India relations under President Barack Obama, have used the two incidents to question the potential for a long-term strategic partnership between New Delhi and Washington.

Such conclusions may or may not be warranted, but are premature. Whether or not it is widely appreciated, the United States and India do have converging long-term interests with regards to Pakistan. Both genuinely want Pakistan to evolve into a peaceful, prosperous and democratic state, not out of any sense of altruism, but out of self-interest. India’s leaders have been remarkably consistent in presenting the external conditions for sustained, rapid economic growth as the country’s top foreign policy priority. An adversarial relationship with Pakistan clearly undermines Indian efforts to attain that kind of economic success. Meanwhile, the prospect of an unstable Pakistan presents Washington with its worst nightmare: nuclear weapons in the hands of international terrorists. Clearly, both India and the US want to see Pakistan succeed by normalising ties with its neighbours, enhancing regional economic integration, and establishing a tradition of peaceful, democratic power transitions.

As a result, Washington has made generous offers of civilian aid in a bid to resuscitate Pakistan’s economy. It has also stepped up attempts at targeting Pakistan’s most wanted militants, such as the Mehsud brothers, and has provided the Pakistani armed forces with some counterinsurgency equipment and training. India, meanwhile, has gone to great lengths to maintain civil relations, despite repeated demonstrations of Pakistan’s ill will, including its involvement in bombings against Indian diplomatic targets in Kabul and its complete non-cooperation following the 26/11 attacks in Mumbai.

But it is becoming increasingly clear that elements of Pakistan’s leadership — both military and civilian — do not share India and the United States’ desire to see the country secure itself, develop or prosper. Instead Pakistan’s leaders consistently demonstrate an unbecoming arrogance, a penchant for mendacity, and a willful disregard for the well-being of their people and country.

The proof is in the myth-making. India’s decision to retaliate against the Mumbai attacks by merely suspending talks was framed as New Delhi being unnecessarily obsessed with terrorism. The US is blamed for being a fickle ally as if no country, Pakistan included, is ever guided by its own national interests. US requests for cooperation on matters that ought to align with Pakistan’s core security objectives and the consolidation of its territorial sovereignty are treated as unreasonable demands. The US offer of a nuclear deal to India in 2005 is presented as playing favourites rather than as a reward for India’s political maturity and good proliferation record. And India’s development and democracy-promoting efforts in Afghanistan, which align with US and NATO objectives, are portrayed as dangerous and illegitimate.

The fiction does not end there. Pakistan’s leaders continue to make loud proclamations of India as a peer competitor, a claim that appears more ridiculous with each passing year. They argue that there was no terrorism in Pakistan prior to American involvement in the region in 2001, another blatant falsehood. And they publicly announce international agreements that their interlocutors never agreed to — such as a nuclear deal with France — something that would shame most politicians elsewhere.

Such self-delusion would be amusing if its consequences were not so tragic. When the country is mired in a rising tide of violence, its leadership’s actions and statements reflect a government that is completely disconnected from the urgency of the problems it faces.

Evidently, the leadership, despite its veneer of democracy and a vibrant domestic media, is not being held to any semblance of accountability. It is worth asking if the responsibility lies, to a certain degree, with Pakistani civil society. Equally disconcerting is what one is to make of supporters in the United States and elsewhere, whose ignorance and naïveté ensure that they continue to make poor excuses for a government that has shown no signs of acting in the interests of regional and global security and stability.

The absence of accountability at home and unwarranted optimism abroad have meant that necessary questions regarding Pakistan’s behaviour are rarely posed, let alone answered. Why exactly does Pakistan continue to engage in activities that appear to hurt itself? After all, the disparity in the number of terrorist attacks between Pakistan and India has in recent years assumed grotesque proportions.

A tentative answer must lie in the civil-military balance within Pakistan. Only the security forces retain an incentive to increase Pakistan’s sense of insecurity, against evidence to the contrary. In a system where the military still rules, even if not nominally, it shouldn’t be surprising the civilian leadership is willing to toe the army’s line. India and the US must think through how to alter the Pakistani leadership’s incentives, a particularly difficult task given Pakistan’s nuclear weapons capability. Empowering Pakistan’s civil society to hold its leadership accountable should be part of any long-term plan. But it may also be time to consider using sticks, instead of just carrots. That may be what it takes to save Pakistan from itself.
Categories: Indian Express
Newer Post Older Post Home