The following article appeared in the March 2010 issue of Pragati. 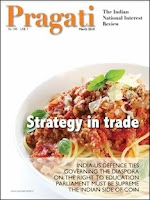 While it may date back two decades, the current iteration of the India-US defence relationship is still in its early stages. Surprising perhaps, but then again, this is no regular relationship. It involves two large, independent and unaccommodating powers, both rising in absolute terms (although perhaps not, in the United States’ case, in relative terms). At the same time, the two countries share certain fundamental values, have common objectives regarding the state of the international system, and articulate similar strategic priorities. Add to the mix two raucous democracies and their combined economic potential, and the end result is — unsurprisingly — the source of considerable expectation, anxiety, frustration and promise.

There is little argument among senior leaders in both countries about the objective of a close collaborative partnership. However, the terms have proven contentious, and are likely to remain so for a long time. For India, co-operation with the United States would preferably be framed as a partnership of equals; be designed to address direct threats to Indian security; and involve American technological transfers to India that bolster India’s defence-industrial self-reliance. Washington sees an ideal relationship quite differently, constituting a closer, co-operative alliance; sales of American systems off the shelf; and Indian participation in a range of US-led operations. Each agenda poses problems for the other partner. The necessary creation of a series of exceptions for India creates difficulties for a legally-oriented establishment in the United States. And for many reasons — not the least of which is domestic politics — the acquiescence by Indian leaders to many American requests could be considered impossible.

US Secretary of Defense Robert Gates’ recent visit to India must be seen in this context, for the mixed messages that emanated during his trip nicely captured the difficulties of advancing this unusual evolving relationship. Gates placed considerable emphasis on a triad of mutually-beneficial security agreements: the Communication Interoperability and Security Memorandum of Agreement, which would represent a significant step forward in terms of Indian access to an array of advanced defence-related technologies; the Agreement for Geo-spatial Cooperation that governs navigation and targeting technology; and the long-pending Logistics Support Agreement, which enables the reciprocal supply of each other’s armed forces. Meanwhile, his counterpart, Defence Minister A K Antony stressed another impediment: the continuing presence of Indian public sector organisations — specifically, Bharat Dynamics Ltd, the Defence Research and Development Organisation, the Department of Atomic Energy and the Indian Space Research Organisation — on the US Department of Commerce’s Entity List, which details restrictions on the transfer of sensitive items. In this round, US eagerness for interoperability and weapon sales was confronted with Indian insistence on technological access.

The last decade of intensified security-related cooperation has witnessed a series of such impasses. In some cases, India has acquiesced to US norms, such as the End-Use Monitoring Agreement. Elsewhere the United States chose to carve out a special niche for India, most notably during the civilian nuclear agreement. For cases past, present and future, overcoming deadlocks depends in large part on how both sets of leaders view the relationship.

A default option would be to treat it strictly as a buyer-seller relationship, wherein India purchases available US equipment at market prices while American firms compete with suppliers from other countries. India would appear to maintain its strategic independence, while such an arrangement might prove satisfactory for major American corporations. India was the fourth largest developing market destination for military equipment between 2000 and 2007, with resources largely being diverted to the capital-intensive air force and navy. While all significant defence deals with the United States to date have been non-competitive, US firms are currently involved in major competitive bids for the Indian market worth over $17.1 billion. That figure could easily increase over time. The downsides to a purely transactional approach would be little in the way of interoperability from an US vantage point, as well as limited Indian access to top-of-the-line technology. And, after all, it was the allure of US technology (and the unreliable post-sale service of longtime Russian suppliers) that made a relationship with the United States attractive in the first place.

A second option is that the two countries could decide to advance their relationship in other manners, leaving aside the thorny problems related to military affairs. For a variety of reasons this appears unlikely. The diversity and scope of common challenges is expected to increase, and experts in both countries agree that defence has the potential to build upon the civil-nuclear agreement in bolstering overall bilateral relations. The senior leadership on both sides has expressed nothing short of enthusiasm for increased military interactions and future defence trade.

Finally, the United States could acquiesce to a special relationship with India in defence matters, just as it did in terms of civilian nuclear technology. This would require the United States to set up unique legal mechanisms for India, and might mean that India jettisons its traditionally cautious strategy of a defence supply mix in favour of a system oriented chiefly towards the United States. Should both sides demonstrate flexibility on these points, the common benefits could be enormous, not just in terms of technology and trade, but also operationally. India and the United States today engage one another on a military-to-military level scarcely imaginable until recently. In the seven years after 2002, they participated in over forty joint exercises, with the Malabar, Cope India and Yudh Abhyas series resulting in greater coordination in naval warfare, aerial war games and low-intensity conflict, respectively. The recently-released Quadrennial Defense Review (QDR), a major long-term analysis of strategic trends by the Pentagon, anticipates India becoming “a net provider of security in the Indian Ocean and beyond,” although this assessment was publicly downplayed by Admiral Nirmal Verma, India’s navy chief.

It would be little exaggeration to say that India-US ties may produce the first egalitarian great power defence partnership since the Sino-Soviet split, and would therefore be unlike any other relationship in recent memory. However, close followers of bilateral relations should remain mindful of the two countries’ differing priorities. Reconciling them will not likely be immediate or easy, but the long-term prospects remain important enough, and the potential benefits so great, that defence will remain a critical element of the relationship for decades to come.
Categories: Other Publications, Pragati
Newer Post Older Post Home