The following article appeared in the Indian Express on February 4, 2010. 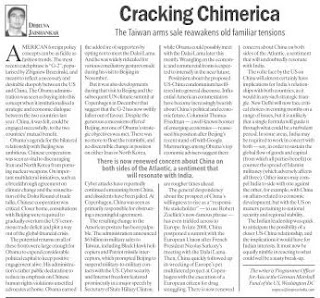 American foreign policy concepts can be as fickle as fashion trends. The most recent catchphrase is “G-2”, popularised by Zbigniew Brzezinski, and meant to reflect a necessary and desirable duopoly between the US and China. The Obama administration was seen as buying into this concept when it institutionalised a strategic and economic dialogue between the two countries last year. China, it was felt, could be engaged successfully, to the two countries’ mutual benefit.

Obama’s agenda for the bilateral relationship with Beijing was ambitious. Chinese cooperation was seen as vital to discouraging Iran and North Korea from pursuing nuclear weapons. On important multilateral initiatives, such as a breakthrough agreement on climate change and the resuscitation of the Doha Round of trade talks, Chinese cooperation was critical. Closer home, consultations with Beijing were required to gradually overturn the US’s enormous trade deficit and plot a way out of the global financial crisis.

The potential returns on all of these fronts were large enough for Obama to expend considerable political capital to keep positive engagement alive. His administration’s rather public declaration to reduce its emphasis on Chinese human rights violations unsettled advocates at home. Obama earned the added ire of supporters by opting not to meet the Dalai Lama. And he was widely ridiculed for various conciliatory gestures made during his visit to Beijing in November.

But it was also developments during that visit to Beijing and the subsequent UN climate summit at Copenhagen in December that suggest that the G-2 has now swiftly fallen out of favour. Despite the generous concessions offered Beijing, not one of Obama’s strategic objectives was met. There was no move to float the renminbi, and no discernible change in position on either Iran or North Korea. Cyber attacks have reportedly continued emanating from China, and dissidents have been jailed. At Copenhagen, China was seen as primarily responsible for obstructing a meaningful agreement.

The resulting change in the American posture has been palpable. The administration announced $6 billion in military sales to Taiwan, including Black Hawk helicopters and Patriot missile interceptors, which prompted Beijing to suspend military-to-military contacts with the US. Cyber security and Internet freedom featured prominently in a major speech by Secretary of State Hillary Clinton, while Obama could possibly meet with the Dalai Lama later this month. Wrangling on the economic and commercial fronts is expected to intensify in the near future.

The general despondency about the prospect of China’s willingness to rise as a “responsible stakeholder” — to use Robert Zoellick’s now-famous phrase — has even trickled across to Europe. In late 2008, China postponed a summit with the European Union after French President Nicolas Sarkozy’s meeting with the Dalai Lama. Then, China quickly followed up its wrecking of Europe’s pet multilateral project at Copenhagen with the execution of a European citizen for drug smuggling. There is now renewed concern about China on both sides of the Atlantic, a sentiment that will undoubtedly resonate with India.

The volte face by the US on China will almost certainly have implications for India’s relationships with both countries, as it would in any such strategic triangle. New Delhi will now face critical choices in coming months on a range of issues, but it is unlikely that a single formula will guide it through what could be a turbulent period. In some areas, India may be required to work in concert with both — say, in order to sustain the global flow of goods and capital (from which all parties benefit) or counter the spread of Islamist militancy (which adversely affects all three). Other issues may compel India to side with one against the other, for example, with China on affairs related to economic development, but with the US on matters pertaining to national security and regional stability.

The Indian leadership was quick to anticipate the possibility of a closer US-China relationship, and the implications it would have for Indian interests. It must now be equally nimble in reacting to what could well be a nasty break-up.
Categories: Indian Express
Newer Post Older Post Home