The following article originally appeared in The Indian Express on November 12, 2009. 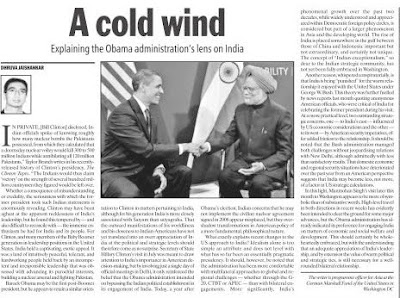 "In private, [Bill Clinton] disclosed, Indian officials spoke of knowing roughly how many nuclear bombs the Pakistanis possessed, from which they calculated that a doomsday nuclear volley would kill 300 to 500 million Indians while annihilating all 120 million Pakistanis,” Taylor Branch writes in his recently-released history of Clinton’s presidency, The Clinton Tapes. “The Indians would thus claim ‘victory’ on the strength of several hundred million countrymen they figured would be left over."

Whether a consequence of misunderstanding or credulity, the seriousness with which the former president took such Indian statements is enormously revealing. Clinton may have been aghast at the apparent recklessness of India’s leadership, but he found this tempered by — and also difficult to reconcile with — the immense enthusiasm he had for India and its people. For Clinton, and many members of the Baby Boomer generation in leadership positions in the United States, India held a captivating, exotic appeal. It was a land of intuitively peaceful, tolerant, and hardworking people held back by an incompetent and irresponsible leadership that was obsessed with advancing its parochial interests, building a nuclear arsenal and fighting Pakistan.

Barack Obama may be the first post-Boomer president, but he appears to retain a similar orientation to Clinton in matters pertaining to India, although for his generation India is more closely associated with Satyam than satyagraha. That the outward manifestations of his worldliness and his closeness to Indian-Americans have not yet translated into an overt appreciation of India at the political and strategic levels should therefore come as no surprise. Secretary of State Hillary Clinton’s visit in July was meant to draw attention to India’s importance in American decision-making, but by involving just a single day of official meetings in Delhi, it only reinforced the belief that the Obama administration intended on bypassing the Indian political establishment in its engagement of India. Today, a year after Obama’s election, Indian concerns that he may not implement the civilian nuclear agreement signed in 2008 appear misplaced, but they overshadow transformations in American policy of a more fundamental, philosophical nature.

What exactly explains recent changes to the US approach to India? Idealism alone is too simple an attribute and does not level with what has so far been an essentially pragmatic presidency. It should, however, be noted that the administration has been more comfortable with multilateral approaches to global and regional challenges — whether through the G-20, CTBT or APEC — than with bilateral engagements. More significantly, India’s phenomenal growth over the past two decades, while widely understood and appreciated within Democratic foreign policy circles, is considered but part of a larger phenomenon in Asia and the developing world. The rise of India is placed somewhere in the gulf between those of China and Indonesia: important but not extraordinary, and certainly not unique. The concept of “Indian exceptionalism,” so dear to the Indian strategic community, has not yet been fully embraced in Washington.

Another reason, whispered conspiratorially, is that India is being “punished” for the warm relationship it enjoyed with the United States under George W. Bush. This theory was further fuelled by news reports last month quoting anonymous American officials, who were critical of India for celebrating the former president during his visit. At a more practical level, two outstanding strategic concerns, one — to India’s east — influenced by US economic considerations and the other — to its west — by American security imperatives, offer added friction to the relationship. It should be noted that the Bush administration managed both challenges without jeopardising relations with New Delhi, although admittedly with less than satisfactory results. That domestic economic and regional security situations have deteriorated over the past year from an American perspective suggests that India may become less, not more, of a factor in US strategic calculations.

In this light, Manmohan Singh’s visit later this month to Washington appears to be more of symbolic than of substantive worth. High-level travel in both directions in recent weeks has evidently been intended to clear the ground for some major advances, but the Obama administration has already indicated its preference for engaging India on matters of economic and social welfare and development. This should certainly be wholeheartedly embraced, but with the understanding that an adequate appreciation of India’s leadership, and by extension the value of warm political and strategic ties, is still necessary for a well-rounded bilateral relationship.
Categories: Indian Express
Newer Post Older Post Home