Failing to Af-Pak a Punch

The following article originally appeared in The Indian Express on March 31, 2009. 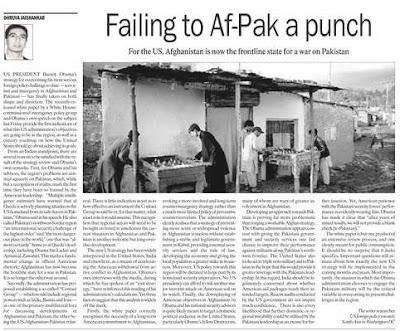 US President Barack Obama’s strategy for overcoming his most serious foreign policy challenge to date — terrorism and insurgency in Afghanistan and Pakistan — has finally taken on both shape and direction. The recently-released white paper by a White House-commissioned interagency policy group and Obama’s own speech on the subject last Friday provide the first indications of what this US administration’s objectives are going to be in the region, as well as a cursory roadmap on how the United States should go about achieving its goals.

From an Indian standpoint, there are several reasons to be satisfied with the result of the strategy review and Obama’s own remarks. First, for Obama and his advisors, the region’s problems are centred squarely on Pakistan, which, while but a recognition of reality, mark the first time they have been so framed by the American leadership. “Multiple intelligence estimates have warned that al Qaeda is actively planning attacks on the US homeland from its safe-haven in Pakistan,” Obama said in his speech. He also called Pakistan’s northwest border region “an international security challenge of the highest order” and “the most dangerous place in the world,” one that was “almost certainly” home to al Qaeda’s leadership, including Osama bin Laden and Ayman al-Zawahiri. This marks a fundamental change in official American rhetoric: Afghanistan has now become the frontline state for a war in Pakistan. It is no longer the other way around.

Secondly, the administration has proposed establishing a so-called “Contact Group” — which would include regional powers such as India, Russia and Iran — as one of the primary multilateral fora for discussing developments in Afghanistan and Pakistan, the other being the US-Afghanistan-Pakistan trilateral. There is little indication as yet as to how effective an instrument the Contact Group would be or, for that matter, what exact role it would assume. This recognition that regional actors will need to be brought on board to ameliorate the current situation in Afghanistan and Pakistan is another welcome but long-overdue development.

The new US strategy has been widely interpreted in the United States, India and elsewhere, as a means of accelerating the American withdrawal from active conflict in Afghanistan. Obama’s own interviews with the media, during which he has spoken of an “exit strategy,” have reinforced this reading of his administration’s calculations. Yet three factors suggest that this analysis is widely off the mark.

Firstly, the white paper correctly recognises the necessity of a long-term American commitment to Afghanistan, evoking a more involved and long-term counterinsurgency strategy rather than a much more limited policy of preventive counterterrorism. The administration clearly realises that a strategy of preventing more acute or widespread violence in Afghanistan is useless without establishing a stable and legitimate Government in Kabul, providing essential security services and the rule of law, developing the economy and giving the local population a greater stake in its success. Moreover, US policy towards this region will be dictated in large part by its homeland security imperatives. No US presidency can afford to risk another major terrorist attack on American soil on its watch. Finally, the downplaying of American objectives in Afghanistan by Obama and his national security advisors is quite likely meant to target a domestic political audience in the United States, particularly Obama’s fellow Democrats, many of whom are wary of greater involvement in Afghanistan.

Developing an approach towards Pakistan is proving far more problematic than forging a workable Afghan strategy. The Obama administration appears content with giving the Pakistani government and security services one last chance to improve their performance against militants along Pakistan’s northwest frontier. The United States also looks set to triple non-military aid to Pakistan in the hope that this would provide it greater leverage with the Pakistani leadership. In this regard, India should be legitimately concerned about whether American aid packages reach their intended targets. Recent audits conducted by the US government do not inspire much confidence. There is also every likelihood that further domestic or regional instability could be utilised by the Pakistani leadership as an excuse for further inaction. Yet, American patience with the Pakistani security forces’ performance is evidently wearing thin. Obama has made it clear that “after years of mixed results, we will not provide a blank check [to Pakistan].”

The white paper is but one product of an extensive review process, and one clearly meant for public consumption. It should be no surprise that it lacks specifics. Important questions still remain about how exactly the new US strategy will be implemented in the coming months and years. Most importantly, the manner in which the Obama administration chooses to engage the Pakistani military will be the critical variable in overcoming its present challenges in the region.
Categories: Indian Express
Newer Post Older Post Home