The New Normal in Kashmir

The following article - co-authored with Sushant K. Singh - was published in The Indian Express on February 11, 2009. 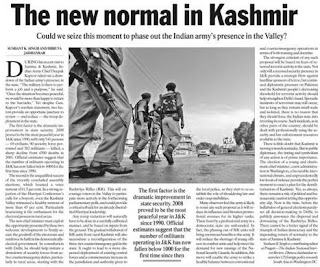 During his recent visit to Jammu & Kashmir, Indian Army Chief Deepak Kapoor ruled out a drawdown of the Indian army’s presence in the state. “The military is there to perform a job and a purpose,” he said. “Once the situation becomes peaceful, we would be more than happy to return to the barracks.” Yet despite Gen. Kapoor’s resolute statement, two factors provide an opportune juncture to review — and reduce — the troop deployment in the state.

The first factor is the dramatic improvement in state security. 2008 proved to be the most peaceful year in J&K since 1990, with only 541 persons — 69 civilians, 90 security force personnel and 382 militants — killed, a sharp decline from 4500 deaths in 2001. Official estimates suggest that the number of militants operating in J&K has now fallen below 1000 for the first time since 1990.

The second is the unqualified success of the recently concluded assembly elections, which boasted a voter turnout of 61.5 per cent. In a strong rejection of the Hurriyat Conference’s calls for a boycott, even the Kashmir Valley witnessed a healthy turnout of more than 45 per cent. Particularly heartening is the enthusiasm for the electoral process in rural areas.

The new chief minister must exploit the opportunity presented by these two welcome developments to firmly secure the goodwill of the electorate and reinforce its faith in his democratically-elected government. In consultation with Delhi, he should help initiate a drawdown of security forces from active counterinsurgency duties, particularly in rural areas, starting with the Rashtriya Rifles (RR). This will encourage voters in the Valley to participate more actively in the forthcoming parliamentary polls, and could provide a critical setback for an already discredited Hurriyat leadership.

Any troop reduction will naturally have to be done in a carefully calibrated manner, and be based on inputs from the ground. The gradual withdrawal of RR units from rural Kashmir will also necessitate a reconfiguration of the three-tier counterinsurgency grid in the state. It ought to lead to a more dispersed deployment of existing central forces and a commensurate increase in the jurisdiction and authority given to the local police, as they start to re-establish the role of shouldering law and order responsibilities.

Many observers feel the army is likely to resist any such proposal as it will reduce its influence and threaten promotional avenues for its higher ranks. These fears by a professional army in a democratic state are unfounded. In fact, the phasing out of RR units will bring enormous benefits to the army. It will reduce the shortage of young officers in combat units and help meet the demand for new raisings of the National Security Guards. In addition, this move will enable the army to strike a healthy balance between conventional and counterinsurgency operations in terms of both training and doctrine.

The strongest criticism of any such proposal will be based on fears of renewed terrorist activity in the state. Not only will a recessed security presence in J&K provide a strategic blow against hardline sponsors of terror, but continued diplomatic pressure on Pakistan and the Kashmiri people’s decreasing threshold for terrorist activity should help strengthen Delhi’s hand. Sporadic incidents of terrorism may still occur, but as long as they remain small-scale and isolated, there is no reason that they should force the Indian state into reversing its course. Such incidents, as in other parts of the country, should be dealt with professionally using the security and law enforcement resources available to the state.

There is little doubt that Kashmir is moving towards normalcy. But in public diplomacy, the timing and symbolism of any action is of prime importance. The election of a young and charismatic chief minister, a new administration in Washington, a favourable international climate, and unprecedentedly low levels of violence provide the perfect moment to enact a plan for the demilitarisation of Kashmir. Yet, as always, there remains a risk of political and bureaucratic caution letting this opportunity slip. Now is the time, before the hullabaloo of general elections paralyses all decision-making in Delhi, to publicly announce the dispersal and downsizing of the Rashtriya Rifles. There cannot be a better signal of the triumph of Indian democracy and the impending return of normalcy to the state of Jammu & Kashmir.
Categories: Indian Express
Newer Post Older Post Home