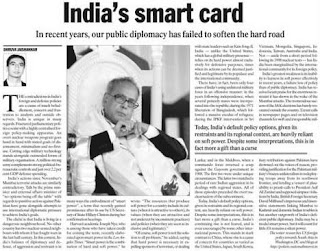 The following article originally appeared in The Indian Express on January 28, 2009.

The contradictions in India’s foreign and defence policies are a cause of much befuddlement, concern and frustration to analysts and outside observers. India is unique in many regards. Fractured parliamentary politics coexist with a highly centralised foreign policy-making apparatus. An overt nuclear weapons program goes hand in hand with stated goals of disarmament, minimalism and no-first-use. Cutting edge military technology stands alongside outmoded forms of military organisation. A million-strong army complements strong political-bureaucratic controls and just over 2.2 per cent GDP defence spending.

India’s actions since November’s Mumbai terrorist attacks are similarly contradictory. Talk by the prime minister and external affairs minister of “no options being off the table” with regards to punitive action against Pakistan have gone alongside attempts to use international diplomatic pressure to achieve India’s goals.

The cliché is that India is living in a dangerous neighbourhood. No other country has two nuclear-armed neighbours with whom it has fought wars in the last half century. In this context, India’s balance of diplomacy and defence, of aggression and restraint is in many ways the embodiment of “smart power”, a term that recently gained prominence after its use by US Secretary of State Hillary Clinton during her confirmation hearings.

Harvard academic Joseph Nye, who is among those who have taken credit for coining the term, recently elaborated upon smart power in the Los Angeles Times. “Smart power is the combination of hard and soft power,” he wrote. “The resources that produce soft power for a country include its culture (when it is attractive to others), its values (when they are attractive and not undercut by inconsistent practices) and policies (when they are seen as inclusive and legitimate).”

“Of course, soft power is not the solution to all problems,” he added, saying that hard power is necessary in expelling sponsors of terrorism, or dealing with state leaders such as Kim Jong-Il. India — unlike the United States, which has a global military presence — relies on its hard power almost exclusively for defensive purposes, times when its actions can be deemed justified and legitimate by its populace and the international community.

There have, in fact, been only four cases of India’s using unilateral military force in an offensive manner: in the years following independence, when several princely states were incorporated into the republic; during the 1971 liberation of Bangladesh, which followed a massive exodus of refugees; during the IPKF intervention in Sri Lanka; and in the Maldives, when a commando force reversed a coup against the Gayoom government in 1988. The first two were under unique circumstances. The latter two matched a period of rare Indian aggression in its dealings with regional states. All of these episodes preceded the overt nuclearisation of the subcontinent.

Today, India’s default policy options, given its restraints and its regional context, are heavily reliant on soft power. Despite some interpretations, this is in fact more a gift than a curse. India’s continuing rise is not feared, and is even encouraged by some other international powers. This stands in stark contrast to China, whose rise is a cause of concern for countries as varied as the United States, Japan, South Korea, Vietnam, Mongolia, Singapore, Indonesia, Taiwan, Australia and India. Nor — aside from a short period following its 1998 nuclear tests — has India been marginalised by the international community for its foreign policy.

India’s greatest weakness is its inability to harness its soft power effectively in recent years, a failure less of policy than of public diplomacy. India has received scant praise for the enormous restraint it has shown in the wake of the Mumbai attacks. The tremendous success of the J&K elections has barely resonated outside the country. Errant calls in newspaper pages and on television channels for swift and irresponsible military retribution against Pakistan have drowned out the voices of reason, providing justification for the Pakistani military’s brazen unilateralism in redeploying troops away from its northwest frontier, and lending a veneer of plausibility to prank-calls to President Asif Ali Zardari and supposed airspace violations by India. British Foreign Secretary David Miliband’s impetuous and insensitive statements linking Mumbai to Kashmir and domestic Indian troubles is but another outgrowth of India’s deficient public diplomacy. India may be a model smart power, but it will count for little if it remains a silent power.
Categories: Indian Express
Newer Post Older Post Home