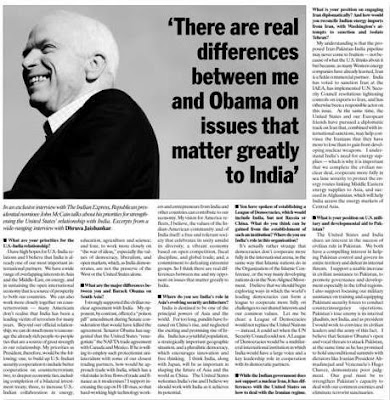 ‘There are real differences between me and Obama on issues that matter greatly to India’ (The Indian Express, October 25, 2008).

In an exclusive interview with The Indian Express, Republican presidential nominee John McCain talks about his priorities for strengthening the United States' relationship with India. Excerpts from a wide-ranging interview with Dhruva Jaishankar.

•What are your priorities for the U.S.-India relationship?

I have high hopes for U.S.-India relations and I believe that India is already one of our most important international partners. We have a wide range of overlapping interests in Asia and the Middle-East, on energy, and in sustaining the open international economy that is a source of prosperity to both our countries. We can also work more closely together on counterterrorism — many Americans don’t realise that India has been a leading victim of terrorism for many years. Beyond our official relationship, we can do much more to encourage the already rich people-to-people ties that are a source of great strength in our relationship. My priorities as President, therefore, would be the following: one, to build up U.S.-Indian security cooperation to include better cooperation on counterterrorism; two, to deepen economic ties, including completion of a bilateral investment treaty; three, to increase U.S.-Indian collaboration in energy, education, agriculture and science; and four, to work more closely on “the war of ideas,” especially the values of democracy, liberalism, and open markets, which, as India demonstrates, are not the preserve of the West or the United States alone.

•What are the major differences between you and Barack Obama on South Asia?

I strongly supported the civilian nuclear agreement with India. My opponent, by contrast, offered a “poison pill” amendment during Senate consideration that would have killed the agreement. Senator Obama has suggested that the United States “renegotiate” the NAFTA trade agreement with Canada and Mexico. If he is willing to employ such protectionist unilateralism with some of our closest trading partners, how would he approach trade with India, which has a vital stake in free flows of trade and finance as it modernises? I support increasing the cap on H-1B visas, so that hard-working high technology workers and entrepreneurs from India and other countries can contribute to our economy. My vision for America reflects, I believe, the values of the Indian-American community and of India itself: a free and tolerant society that celebrates its unity amidst its diversity; a vibrant economy based on open competition, fiscal discipline, and global trade; and, a commitment to defeating extremist groups. So I think there are real differences between me and my opponent on issues that matter greatly to India.

•Where do you see India’s role in Asia’s evolving security architecture?

India is destined to be one of the principal powers of Asia and the world. For too long, pundits have focused on China’s rise, and neglected the exciting and promising rise of India. India has a youthful population, a strategically important geographic situation, and a pluralistic democracy, which encourages innovation and free thinking. I think India, along with Japan, will be as important in shaping the future of Asia and the world as China. The United States welcomes India’s rise and I believe we should work with India as it achieves its potential.

•You have spoken of establishing a League of Democracies, which would include India, but not Russia or China. What do you think can be gained from the establishment of such an institution? Where do you see India’s role in this organisation?

It’s actually rather strange that democracies don’t cooperate more fully in the international arena, in the same way that Islamic nations do in the Organization of the Islamic Conference, or the way many developing nations do in the Non-Aligned Movement. I believe that we should begin exploring ways in which the world’s leading democracies can form a league to cooperate more fully on challenges to our shared interests and our common values. Let me be clear: a League of Democracies would not replace the United Nations — instead, it could act when the UN Security Council could not. A League of Democracies would be a multilateral international institution in which India would have a large voice and a key leadership role in cooperation with its democratic partners.

•While the Indian government does not support a nuclear Iran, it has differences with the United States on how to deal with the Iranian regime. What is your position on engaging Iran diplomatically? And how would you reconcile Indian energy imports from Iran, with Washington’s attempts to sanction and isolate Tehran?

My understanding is that the proposed Iran-Pakistan-India pipeline may never come to fruition — not because of what the U.S. thinks about it but because, as many Western energy companies have already learned, Iran is a fickle commercial partner. India has voted to sanction Iran at the IAEA, has implemented U.N. Security Council resolutions tightening controls on exports to Iran, and has otherwise been a responsible actor on this issue. At the same time, the United States and our European friends have pursued a diplomatic track on Iran that, combined with international sanctions, may help convince the Iranians that they have more to lose than to gain from developing nuclear weapons. I understand India’s need for energy supplies — which is why it is important that we complete the civilian nuclear deal, cooperate more fully in sea lane security to protect the energy routes linking Middle Eastern energy supplies to Asia, and succeed in Afghanistan, which will help India access the energy markets of Central Asia.

•What is your position on U.S. military and developmental aid to Pakistan?

The United States and India share an interest in the success of civilian rule in Pakistan. We both have a compelling interest in helping Pakistan control and govern its entire territory and defeat its internal threats. I support a sizable increase in civilian assistance to Pakistan, to promote governance and development especially in the tribal regions. I also support focusing our military assistance on training and equipping Pakistani security forces to conduct counterinsurgency operations. Pakistan’s true enemy is its internal jihadists, not India, and as president I would work to convince its civilian leaders and the army of this fact. I believe that Senator Obama’s open and vocal threats to attack Pakistan, at the same time as he has promised to hold unconditional summits with dictators like Iranian President Ahmadinejad and Venezuela’s Hugo Chavez, demonstrate poor judgment. Our goal must be to strengthen Pakistan’s capacity to deal with our common enemies and eliminate terrorist sanctuaries.
Categories: Indian Express
Newer Post Older Post Home